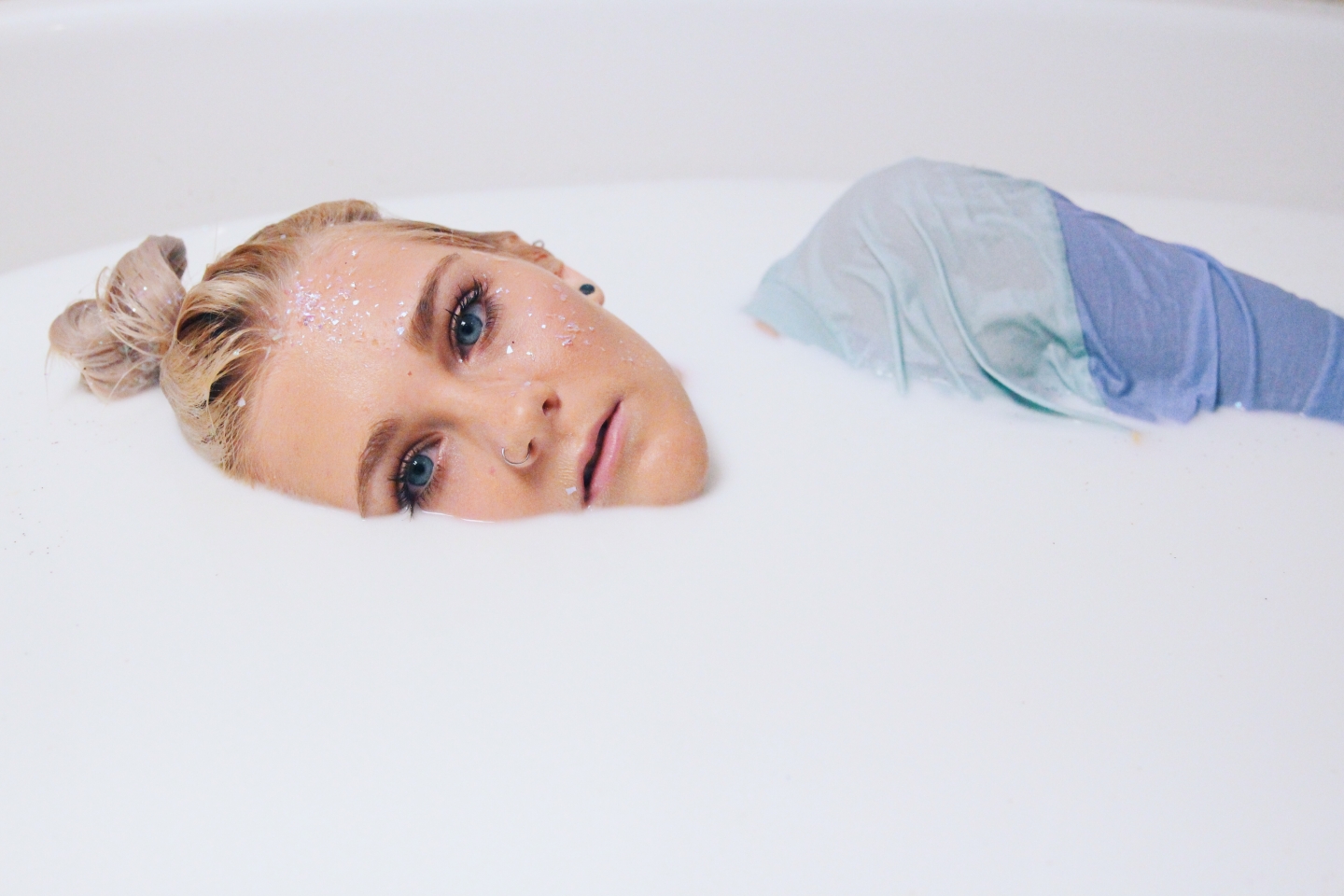 The Resident stood on the front porch, looking out at the hills. She was a muscly woman, who liked to paint her face: penciled eyebrows and cold white make-up, to make her look like a silent movie actress. She had been fighting her way through the world like that, because without her make-up, no matter what her age, she was convinced she looked girlish.

Here at the Place, she reckoned one might read the concentration of “being” under the paint, of trying to make everything count. Her black eyes did not rest anywhere for long, as she anticipated her next moves in an inner choreography.

To sit on that front porch and appreciate the same view that the Poet Laureate had seen – this was her exercise. To walk around the house and examine the bushes in measured strides, exactly as he had done – that was her duty. And to wait for inspiration. It would inevitably come – in four weeks of concentrated waiting, it would.

On Tuesdays and Fridays a local girl came to clean. She was the daughter of a hotelier, who wanted to earn extra cash in summer. As in tune with her surroundings as the Resident was, this girl was a mere physical hull, cruising through the two-story cabin wearing big, green gloves and headphones, a distant look on her face. As the Resident tried to sink into a lyrical lull on the porch, legs entwined under her laptop, the girl worked up a sweaty glow, orbiting the Resident as if on autopilot.

She must go home and then appreciate these hills, thought the Resident, these are her hills.

The downside of the Resident’s job, which she told herself would keep her grounded all the while, was the so-called museum, the parts of the house that the occasional tourists came to see.  Although the hours were listed clearly on the website, people tended to drop in randomly, at unappreciated times. And her obligation, by contract with the long deceased muse, was to show them around, answer questions, and point them to the wooden donation box.

There were hand-painted signs on the doors and walls that spelled out which sections were private and which public, but the literary looky-loos invariably took delight in turning handles and poking their heads in. To be greeted with tensed arms and a small, secretive smile.

In the evenings, however, people seldom wandered up the mountain and the rooms of the museum rested coldly and quietly. The desk replica ceased to exist in the dark, the donation box digested what had been tossed in that day, and the upstairs children’s beds might as well have been ordinary ones. The wrought-iron wood-burning stove was never lit, not even in winter. The Poet himself had lived in the house with his family for four years, unhappily.

After dinner the Resident liked to open a bottle of wine, usually red, often left over by a friend. Her appointment to the Place earlier that summer had sent a ripple of interest through the Village circles, amongst the upstate crowd and across to the other coast. And these people could travel in summer.

The adventure of the project lured them, and such visits were officially permitted. Though the banal simplicity of the house did not impress them at first and expectations ranged broadly, later during first night, as the wine began to flow and the dining room ceiling began to glow as brightly as a canopy of stars, the more the place shone, until stanzas were recited and pondered, and all eyes turned to the Resident, who would soon deliver her own – unrelated, but just as inspired, crowning her academic career and establishing herself as a poet. And when they’d had enough wine they said it was like back in the day in Rosendale, without the ticks. And they retreated to slumber with capricious smiles, some to furtive pairings. And afterwards, the Resident felt very alone, despite the leftovers.

Until the bear arrived.

There was a Docent named Tim who came on the days when the museum was open to visitors. He set up films in the unused garage, so he would not have to talk for long and entertained the visitors with a bit of regional trivia. He was pleasant enough, not the ivory tower type. In a gender-conscious way, as the Resident stood in the kitchen window watching Tim going in and out of the garage, she thought it ironic that he should be in the garage and she in the kitchen, and that she wanted him because he was the only man around for miles. She stood there, arms folded, eyes narrowing, feeling that irony.

One morning she awoke with the question: shall I invite Tim in? She looked to the mountains for an answer, but none came. She suspected Tim was the type who wanted children, of which, fortunately, there were few in the area. If the Resident happened to be near one she tended to look the other way or swivel around abruptly. She found children a distraction, not much more.

The Poet had tired of these hills.

In the mornings, every morning, she practiced a yoga sequence she had been doing rigorously for five years. And then she went for a walk on the path that had been prepared by the Society to entertain the visitors. Along it stood polished stone benches honoring dead members and contemporary writers. With funding from the Society, a selection of poems had been posted on placards in little clearings, which had been sown with plants, none of which the Resident knew the names of.  What she did recognize, however, were the wild raspberries. She got to them with her long arms, scrunching up her painted face.

There were two spots where the raspberries grew – one at the point furthest from the house, the other just behind an over-sized sign at the start. After her yoga, on the walk, she stopped at each spot to pluck a few berries and contemplate the tastes and moods of New Hampshire – one berry-picking cliché after another. No matter how she tried, she could not establish an original relationship with the taste of those raspberries, but it was a nice daily ritual and they tasted good. It occurred to her to pick a handful for Tim and take them to the garage. He told her he loved raspberries and used to collect them as a child with his grandmother for pie. Another cliché.

And the weeks passed.

One evening the Resident was sitting on the living room couch, many empty pages through the Residency, thinking about Tim’s eyebrows, when she heard a noise, turned towards the porch and saw a bear’s head through the window. She squinted, grasping the stem of her wine glass very hard, and opened her eyes wide again. It was gone.

She took a deep breath and decided it was time to go to bed. There was no bear.

But the next morning, as she prepared to drive to town for fresh pasta, her elderly neighbor from up the road was standing in front of the house and called out: “Heya!”

The Resident paused, put the car in “park” and climbed out. As the neighbor approached, she barked something about a “bea-yah”.

“Two kids up on Sugar Hill Road seen it,” the lady said, slightly out of breath, with no change of expression. “It was the Miller boys, Sam and Neesie.” She held a crude walking stick in each hand.

“It was a large one, eating berries, they couldn’t tell whether male or female, young or old,” she said. In these parts, the Resident thought, the elderly talk like reporters.

The Resident did not mention the head in the window.

And then the bugs buzzed over the empty page in the week that followed. There were brilliant sunsets on the mountains, but they did not descend to the page. One after another, clichés squirted into her mind like the berries bursting in her mouth. Here she was, a typewriter not typing, with a bear roaming in New Hampshire. Harrumph. However, the rituals were good, she told herself, and she walked along the path again to get at the berries furthest from the house, obstructed deep in the bushes. And the bear had yet to appear.

Tim was not impressed. He had merely shrugged when she dared to mention the head in the window on returning from a walk to see him arriving. He had seemed studiously busy, but she noted that he was carrying a large grocery basket full of cold cuts. As she settled down with her laptop on the porch and a handful of visitors arrived, she told them: “The Docent is in the garage.”

And then there was only one more week to go, and not a poem completed, and it was late August and the bugs’ buzzing had escalated to a cacophony. On this day she stepped far into the raspberry patch, bent low, and heard a growl.

There was no time for a detailed analysis. In a fluid, natural motion, her well-trained yoga arm grabbed a three-foot rotting stick that lay nearby on a patch of grass and brought it first up then down firmly, accompanied by – pranayama! a forceful exhalation – onto a big shaggy, swaying brown thing.

Which collapsed under a pile of rugs. And one boy ran away, and one lay there motionless.

The remaining child, whom she was forced to smile at reassuringly until the ambulance and his parents arrived, survived the incident with a mild concussion. Assisting her through the ordeal was Tim, whose insouciance had become a nuisance. Tim, who had invited the cleaner to watch a comedy with him in the garage. Tim, who had incorrectly said “it will bowl over” instead of “blow over”. And Tim, who found the event somewhat amusing. And with no quick comeback in her repertoire, the Resident was left with an image of herself as a human-sized bowling pin with a clown’s face – there on the hill, in the tidy house that was not hers and had ceased to be anyone’s, with a few bills curling like autumn leaves in the donation box.

The Resident’s arms were exhausted. In the early grey hours she packed up her things, put on several thick layers of city clothes, and had just enough energy to grab the steering wheel and foist it down the curving miles.

Back in the shared two-room Brooklyn flat, the no-longer Resident crawled into bed and slept. Only a few nights later, under a starless sky, she awoke on her sweat-soaked bed with a precise hallucination that made her breathe faster and smile broadly: she was attending a swank Manhattan banquet, dressed in an elegant red gown, holding in one hand a glass of champagne, in the other the fingers of a young, tuxedo-ed gentleman. They were at a romance writers’ convention and she had just signed a book deal – the one about the glamorous actress who is lost in the woods and rescued by a strapping young lumberjack cum bear hunter, who turns out to be of Scottish descent and, after ravishing her thoroughly, convinces her to move to the ancestral seat, where she becomes the target of affection of the castle ghosts until she is tracked down by a scorned agent, who reveals her identity to the local press … and every last cent of the Society stipend had been reimbursed.

A. Nolte is an American writer and translator living in Vienna, Austria. She has participated in several writing groups and workshops such as the Keele University writing retreat. She has only just begun to submit her work for publication.