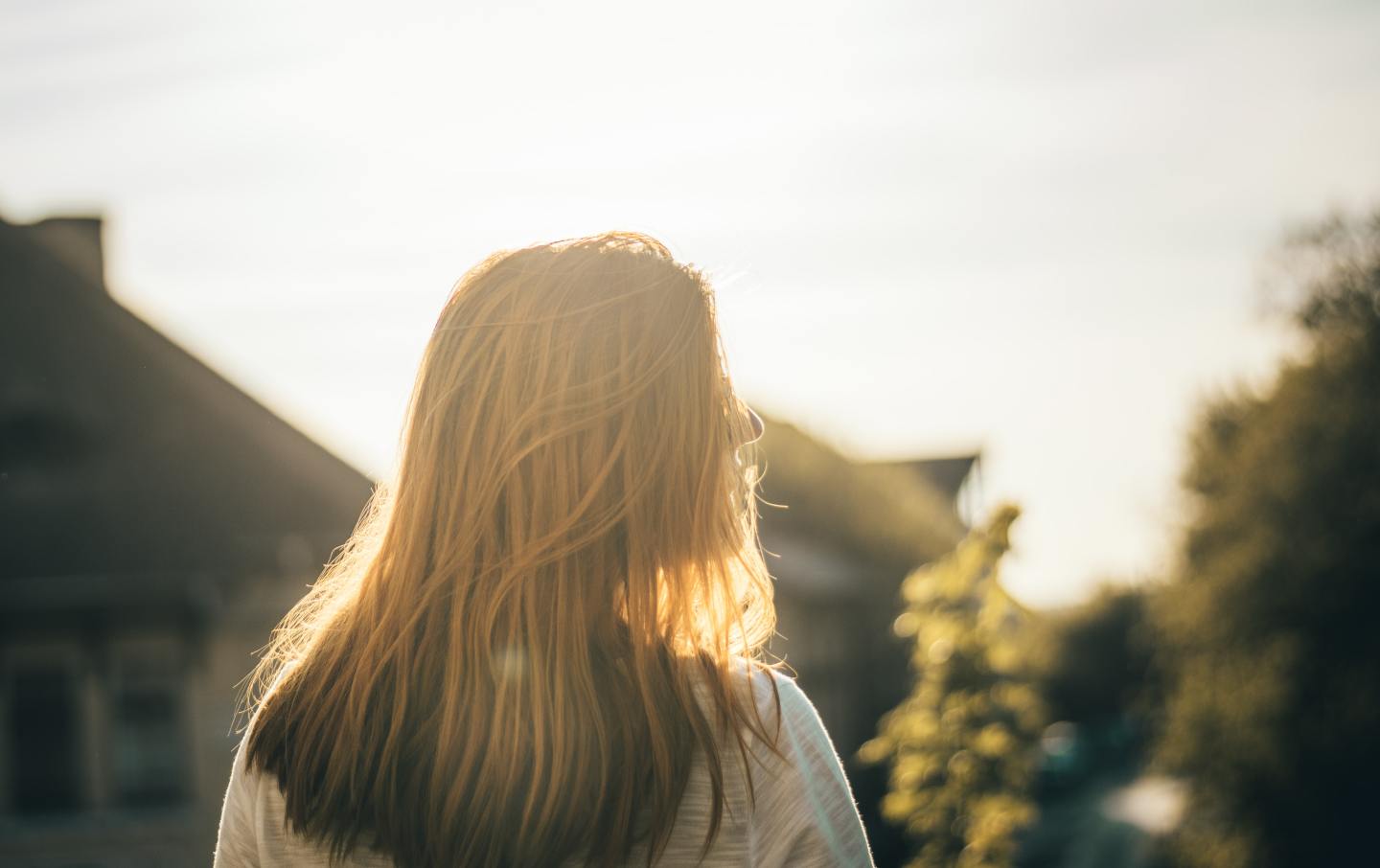 Carol had pissed the bed again. But when she pulled back the covers she could see amongst the room’s labyrinthine shadows, that her urine looked like black ink. She climbed out of bed, soaked through, collected her phone from the nightstand and went to clean up in the bathroom.

But what did she know? She’d had a breakdown at seventeen and was cutting her sedatives with baking powder, selling it to junkies who stood around fires in duffle coats near the Camden lock canal.

Carol was horrified. Something must have sliced her belly open because she was pouring with blood not urine. She locked herself in the toilet and unravelled some loo roll, lifted up her nightgown and tried to stem the flow. But the fluid kept coming – pools of blood gathering around her feet and steadily spreading out in concentric circles. Strands of her matted hair were swimming in the mire – wrapped around her grubby toes. Sustained stabbing sensations shot through her body.

She Googled it and discovered she was having her first period. No one had prepared her for this, not her dad, not even her fucking mum and now her guts were falling out like someone had butchered her at a slaughterhouse. Carol used her sister’s tampons that were stacked on the toilet tank and she stuffed as many as she could find inside her but Google didn’t mention what to do if blood gushed out like a tap.

Carol sat on the loo and logged into Instagram. Maybe after a quick scroll through her life, and everyone else’s, everything would return to normal. There was her mum who’d been missing since Friday, but that wasn’t out of the ordinary and she was still updating her account so Carol wasn’t particularly concerned. And then there was her boyfriend, Randolph, who she hadn’t actually met yet and everyone at school said was a paedophile (there were no pictures of him on his page), but what did they know? She was in love.

Anyway, all her friends were dating boys with fluffy moustaches and braces lined with yellow gunge – so what if her boyfriend was old? Who knows, maybe he’d have a hairy chest and a big ding-dong. Carol sniggered at the thought, checked her flow, which was still torrential and then focused her attention on her sister groaning through the door.

“Jasmine, do you have periods?”

“What’s going on in there? You on the blob? Congrats. Welcome to the real world.”

“I think dad broke his restraining order and tried to kill her again. She’s in hiding. I think. Now let me in.”

“I can’t, something bad is happening to me.”

“Not this,” Carol said, as blood swelled around her ankles.

“You do know what will happen to me if I don’t take my drugs?”

If Jasmine needed the loo, she’d just have to shit in the kitchen sink. Then, as Jasmine began to pound on the door, Carol’s boyfriend pinged her a text.

An alert showing her mum had added to her story seized her attention away from Randolph. On the timeline were the words, “He did it again, lucky I escaped before he could do any worse.”

Carol wanted to call her mum but she knew she wouldn’t answer. She was the type of person who found solace in the detachment of texts.

Randolph was bombarding her with messages – “Are you ignoring me? Who are you talking to? Don’t you love me?”

“You don’t trust me? I knew I shouldn’t have got involved with you, all my friends said you were a child.”

Carol was sitting all huddled up on the toilet lid to avoid getting her legs wet.  Her phone began to ring. “Carol, we’re in trouble and it’s getting deeper by the second.” It was her dad. “So I need to know, where’s your mum?”

“Ok, listen to me, if you do hear anything remember she’s a liar, especially when it comes to me.”

Jasmine was steadily losing her mind – grinding her head against the door like a mortar and pestle.

Randolph’s latest text showed a photo he claimed was him. Now Carol realised why he hadn’t revealed himself before. Randolph wasn’t a paedo, he was just dog ugly.

Randolph was ranting now, “If you think I look a mess let me tell you this, I’ve shagged loadsa chicks and I bet you’re still a virgin. You know I really don’t need this bullshit. Ok, listen, I’ll give you one last chance if you let me finger you.”

His words cut deep, because she really was in love with him. Carol’s sister was having a laughing fit and started talking in broken French – which she learned from the maid that pretty much brought her up until dad fucked said maid, getting the ball rolling for all the family’s psychotic behaviour.

The blood was splashing about half way up the walls.

“How can I change things, make things better?” Carol cried.

“Who are you talking to, you crazy bitch?” Jasmine said, scraping her stick-on nails against the bathroom door, hyperventilating.

Carol phoned her dad and texted her mum and told them, “Come around the flat, Jasmine is having a breakdown, she’s speaking French again, pissing into Tupperware, wielding a crucifix. Hurry.”

An hour later the blood had risen above Carol’s shoulders and she was deciding what to do with her final breaths. Outside Jasmine was on her knees reciting the alphabet and pawing at her bloodshot eyes. Her parents had arrived and had sussed out the scene. They swapped daggered stares -barely able to resist brawling with each other as they consoled their daughter, begging for Carol to open the door.

Finally, Carol dipped her head under the surface of the blood and swam down to the door and unlocked it. The door swung open and the deluge flooded the hallway, swamping her family – rancid smell, shredded tampons strewn everywhere. The blood filtered away, leaving everyone on their backs, groaning and gulping for air like goldfish out of water. Carol’s phone died as Randolph unleashed his last volley of vitriolic texts.

Her family were beginning to surface. They were groggy and lightheaded, as if they’d been punched in the head. “What just happened?” Carol’s dad said.

Carol’s mum lifted herself from the sodden carpet, clothes dripping wet, in a trance and stepped over Jasmine who was quietly chewing on a lampshade cord. She hugged Carol and said, “Welcome, young lady. You did it. You are a woman now.”

Carol fell to her knees and burped. The blood was congealing. The flood had ceased somehow. She was done. Until next month.

Tim Frank’s short stories have been published in journals many times including Bourbon Penn, Bartleby Snopes, Thrice Fiction, Fiction on the Web, Scarlet Leaf Review, Lowestoft Chronicle, Blue Mountain Review and Able Muse. He specialises in the comic, the dark and the surreal. He has written a semi-autobiographical novel, Devil in my Veins, and is currently writing a sci-fi thriller novel.