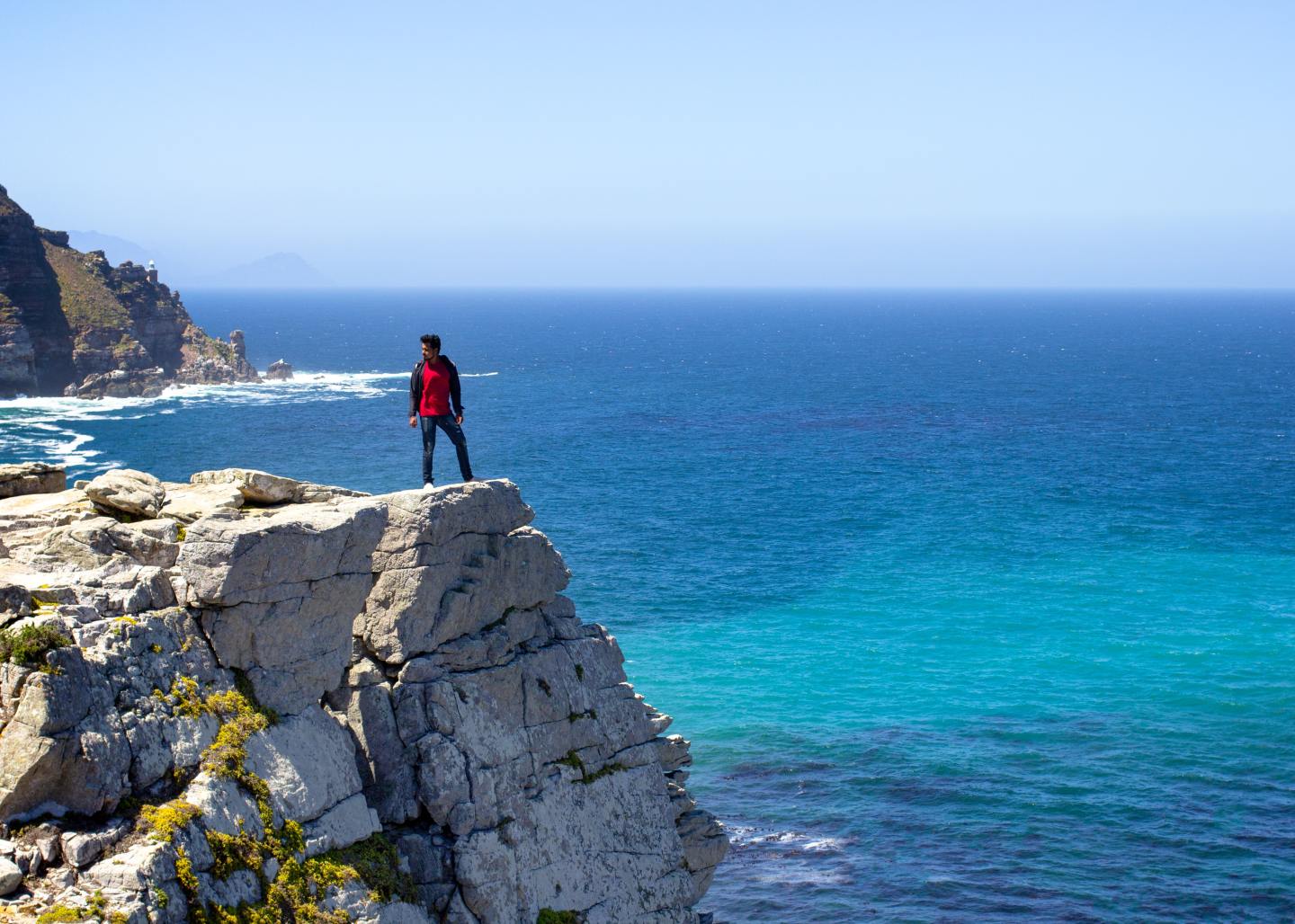 As I stare through the restaurant’s floor-to-ceiling windows—watching the sun plunge into the Atlantic like a fiery bobber, considering the magnitude of the space monster capable of yanking it into the endlessness of the universe—this surfer guy I recognize sits at the bar.

His name is Trey. I’ve wasted many an afternoon watching him surf, hidden beneath my little purple umbrella, but he’s never come in until now. I first noticed him at the beginning of summer when he arrived on the island.

“You are the bartender?” Trey asks.

“You just look so elegant.”

“This is my only excuse to dress up.”

I’m dressed in black. My dangly earrings brush my shoulders. My natural red hair is up. Trey’s wavy hair scrapes his collar. His innocent eyes scan the beer cooler. Before he can decide, I slide a craft beer I choose in front of him.

As he takes a sip, I lean against the bar, resting my chin in my hands. I imagine him riding an endless bomb, boosting, bailing, then paddling out again, and I imagine myself, on the beach watching, nude, only us in the world, waiting for him to return to shore.

While we flirt, I absent-mindedly mention my husband, Jay and instantly regret it. I watch the disappointment rise on Trey’s face as my heart sinks like the sun behind him. Despite his disappointment, he stays, and we talk for a tension-filled hour. No customers approach the bar as if they can sense the magnitude of our connection.

“We should get together sometime,” Trey says, standing to leave.

And I’m scratching my number out onto a post-it.

Amid endless gunshots and explosions from Jay’s Call of Duty videogame, I friend Trey on Facebook. The blond clasped around his waist in his profile pic is so hot I regret friending him. His cover photo is a magazine quality shot of him surfing. I’m shocked when he immediately accepts the request.

“What’s got you so smiley?” Jay asks.

I scroll until I find a funny meme, angle the laptop Jay’s direction, and continue stalking. Jay forces a laugh. I devour Trey’s photos and am transported into a carefree world of travel, sun and excess.

“I can’t believe your mom lets you play this, you little fucker. What are you, twelve?” Jay says into his headset.

Jay’s kitchen friends will come over soon. They’ll drink and murder other people, sitting in other rooms, on headsets, for the foreseeable future. And I’ll be left in peace, unnoticed, to ponder things that make me feel something. That make me not feel stuck. Stuck with Jay in this house Jay’s parents rent us. Stuck on the map.

I notice Trey online and hope he messages, but he doesn’t.

Jay bites his cleft lip as his character tosses a grenade. I could be a thousand miles away. A ghost in a box. Jay is ten years older and he looks a little monstrous, but he’s my monster.

We met when I was sixteen. Me seated alone at the skate park smoking, rubbing fresh strawberries on my knees; Jay skulking up asking for a light. He was always around after that. Everyone found it odd.

The TV screen is black except for a guy’s head in the crosshairs of a sniper’s sight. Jay pulls the trigger. The guy’s head explodes, and the body falls lifeless. Then Jay’s character is sprinting, dodging bullets and explosions, and Trey still hasn’t messaged.

Hours past noon, Jay is at work, and I’m still in bed. I gaze out the bedroom window at this writing spider web on the corner of the house that Jay insists we not destroy. There’s a flitter. The web trembles, and a trapped moth fights to free itself.

Trey and I have been texting for weeks. I feel a rush each time my phone vibrates. I message back in ways that leave his mind in shambles, scurrying to formulate a response.

Today, Trey’s in Wilmington, where I attend community college, taking general courses, with no plan in mind. I mention I’m on a break, and he suggests we meet at the mall. Where I glide in my car, see nothing I pass, and only realize I’ve arrived because I’m parked.

I float through a department store, passing racks of clothes. Then I’m standing in front of him. He’s gazing down. I’m vacantly smiling. And people shop.

“I only have a few minutes before my next class.”

Trey follows me to my car, which I find after much aimless wandering. Inside, he surveys its strange contents: most of my wardrobe, a pair of red heels, candles, Origami animals made out of duct tape. A microwave.

“What is happening in this car?” Trey pops open my glove box; a roll of cash tumbles out. “Rob a bank?”

“Decade of indentured servitude,” I stick out my tongue and grab the roll.

I watch him bite his nails, wishing he would jump across the seat and put me in a situation I can’t control.

“Don’t want to be late for class,” Trey says.

And he’s strolling across the parking lot in my rearview, and I’m sailing into class.

At home, Jay is suspicious of the intense new relationship that’s blossomed with my phone. When he asks questions, I act annoyed.

One afternoon, Trey texts that he’s moving to Costa Rica to surf year-round. He’s flying there for a week to check out houses. Something inside of me dies as I imagine him dissolving into the ether of Facebook posts and photos.

The night before Trey’s return, I’m on the couch, feet on Jay, so he can’t see my screen. He rubs my leg, past my knee, up my inner thigh, as close as he can get, before rubbing back down to my feet. It turns me on. Trey mentions he’s getting a room in Wilmington for the night to visit friends before returning to the island. We agree to meet.

I stand in the middle of the rubbing. Jay watches my exit with mild curiosity. I lock the bathroom door and turn on both lights and strip. I stand in front of the mirror. I’m so pale. Blood, blue in my veins, connects in a spider web pattern across my chest.

Hot water from the shower rolls over me. I shampoo my hair, massaging my head until I almost fall asleep standing. I wash with Castile soap and then a body scrub. I lather shaving cream then shave.

The leftover steam is thick and wet as I sit on the edge of the tub smoothing my legs with lotion. I floss, rinse with mouthwash, and brush my teeth.

As I exit the bathroom and enter the bedroom Jay leans in the bedroom doorway. He blinks fast at the sight of me naked. His eyelids reminiscent of the moth’s wings in the spider’s web.

I climb in bed and turn away from him. He tries to kiss me, but I won’t kiss back. He squeezes my hip and pulls, but I refuse to budge. He sighs and kisses my forehead. The weight on the mattress shifts. I hear the patio door open and close as he goes out to smoke.

I touch myself, keeping my eyes trained on the light under the door. I try to control my breathing, but soon I’m gulping for air. Then my legs are shaking, and I know I’ll be out the moment I close my eyes.

It’s afternoon, but the bar in Wilmington is dark. Shards of sunlight crawl along the floor. I’m wearing a green sundress and white Keds.

I join Trey at the bar, but don’t sit. The eyes of several lonely men undress me.

I have a strong buzz when he says, “Want to go to my room?”

“What about your friends?”

“You think I’m just going to go back to your hotel room?”

He kisses my neck and everything good swells.

The hotel isn’t far. As the elevator climbs, I relish the charged silence.

The curtains are drawn and it’s dark for daytime. The bed is wide and high. I stand at the foot. Trey steps into the doorway. Then we’re falling onto the covers.

He removes my dress. I climb on top and look down on him. His muscles flex covered by a sheen of sweat. As I prepare to slide him inside, my phone rings.

“You have friends in Wilmington?”

While I field Jay’s questions, Trey slips his tongue inside me. I muffle moans, convince Jay to let me go and bury my face in pillows.

I leave at midnight, knowing Jay will be home by one. Trey appears devasted watching me leave. Then I’m on the long, winding road back to the island, watching headlights in the rearview disappear every time I round curves. At some point, Trey texts begging me to return.

I light a cigarette and lower my window. Turn up Interstate Love Song by the Stone Temple Pilots as loud as it will go, punch the gas and leave the message hanging.

I’m barely home when I hear Jay pull up. I lift myself onto the kitchen counter. He uses his key, but the door isn’t locked.

“You look amazing,” he says, the excitement on his face borderline cute.

I glare until he leaves to shower then wander into the living room where I fixate on the indention in the couch where he sits.

In the bedroom, I find him searching for a shirt.

He freezes as my dress falls to the carpet.

I watch him thrust, unsure and awkward. My monster. His muscles lack definition. His sweat does not make him shine. I imagine Jay’s juices mixing with Trey’s; future lives captured in cloudy fluid waging war inside my body.

Jay leaves at six am for deliveries. He kisses my forehead and drives away. I step outside and light a cigarette. My phone vibrates.

I walk through the front yard and stand in the empty street, smoking in the dull dawn haze. The din of crickets deafens. I glance at my car in the driveway. One red heel stands in display on the back dash. I don’t remember it being there. My phone vibrates.

Jay’s message reads: “Last night was amazing, I love you.”

Behind the house I unspool the hose, drag it close to the bedroom window and spray away the writing spider’s web until nothing remains.

I go back inside and take one last look around our little house, at our photos, our memories, my strategic decorating that kept me sane. At Jerry’s realm: the playstation, the tv, the dent on the couch.

Then I’m driving over the bridge with the windows down, bags packed, leaving the island. The ocean breeze whipping anything it can pick up around the car’s interior. The hug of salt air wraps thick, hot. In the rearview the sun rises out of the water like a fiery red bobber lifted from endless space, and I consider the magnitude of the fisherman.

Wilson Koewing is a writer from South Carolina. He received an MFA in creative writing from The University of New Orleans. He has work published or forthcoming in Pembroke Magazine, Sky Island Journal, X-R-A-Y, The Menacing Hedge, Tiny Molecules and Five on the Fifth.