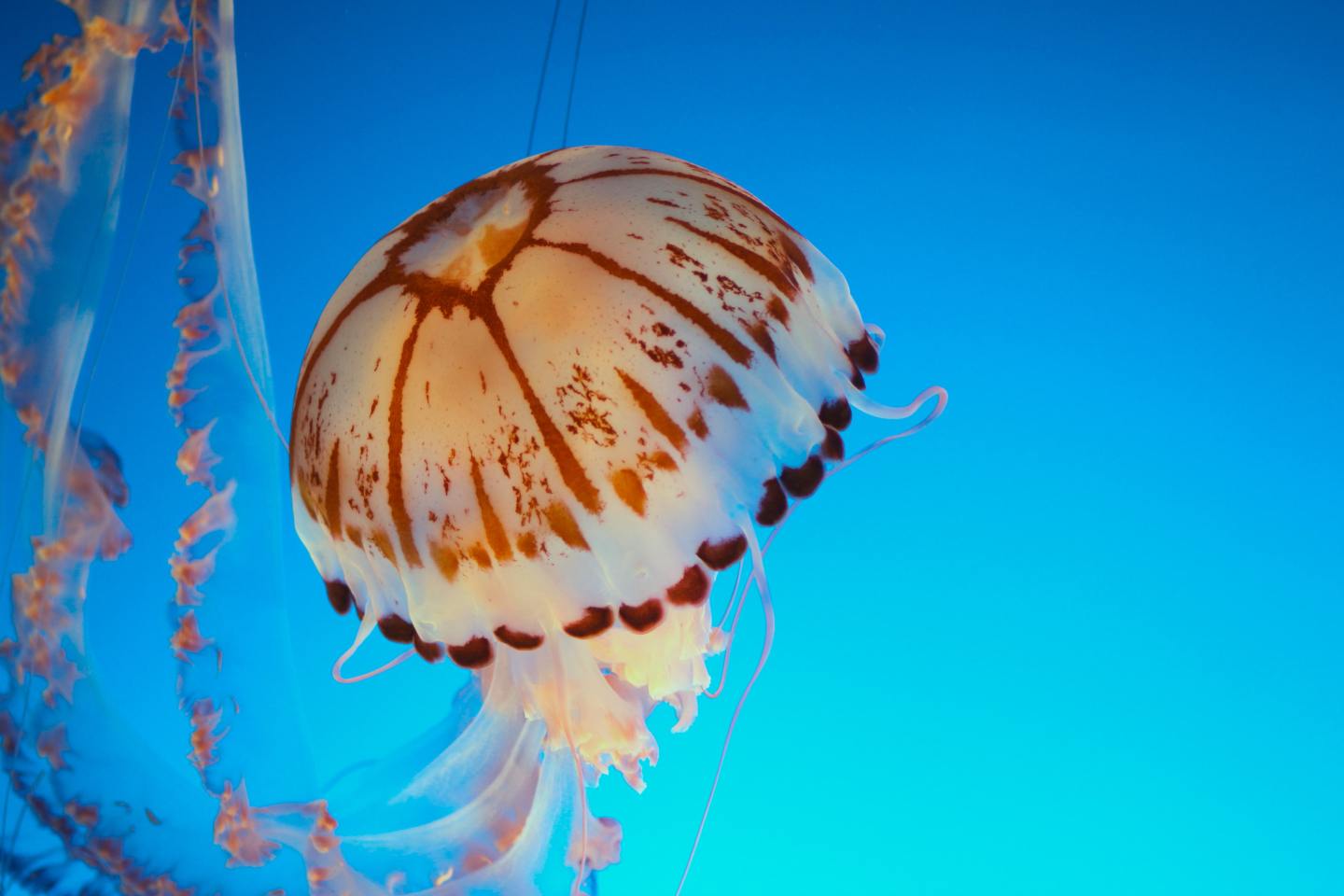 Cee had once liked it when Dan called her his daisy, but now she thought, no. She was more like a jellyfish. Graceful, shapeshifting, impossible to grasp. Daisies were thornless, but she had a sting. On the shelf in his bedroom stood a picture of her in a flowered dress. She put it face down. She’d taken to blue jeans, army surplus jackets. She fumbled in her backpack for a cigarette, found one under her book, Introduction to Biological Oceanography.

He rubbed his swollen elbow.

They are correctly called jellies. They aren’t fish. They aren’t octopuses or anemones. They are different from snakes and worms, starfish, clams, spiders, snails. Cnidaria: A classification all their own.

She tapped the cigarette, glanced out the window, caught his reflection as he watched her. Radial symmetry, she thought. All body parts emanating from a central point. Able to detect food or danger from any direction. She pointed the cigarette at his arm.

She shrugged. Most of the time, he ignored it. He never talked about the transfusions. He could bleed to death from a pin prick, but still, he rebuilt engines, repaired fences. They called it the Bleeders’ Affliction. The Disease of Kings.

She lit her cigarette, blew the smoke upward, watched it shift and blur in the breeze from the window. Cnidaria: The name means stinging nettle.

“Why did you put the picture face down?” he asked. “I like that picture. It reminds me of  . . .” He didn’t say, “the way you used to be.” The pleated skirts were stored in boxes in her mother’s attic.  At college on the coast, she smoked dope and slept with arrogant, swaggering young men. She had learned that she could have any one of them.

He had kept his hair short, had taken a job on a dairy.  At first, he called twice a week, drove up to campus every other weekend. He’d thought that after graduation, she’d come back.

“It’s not that,” she said, nodding at his arm. “It’s not the blood-thing.” What she meant was: she wouldn’t leave him because of his disease.  “You believe me, right?”

He looked across the room at her. “It doesn’t matter why you are leaving. It just matters that you are.”

Jellies have no true organs. They have no blood. They cannot bleed. But they do have cells that respond to light shining on the water’s surface.  In the bright sun of midday, they descend into the dark.

Cee met Dan for coffee the summer she graduated. He brought the girl he was seeing, Melinda. They met at Denny’s on the highway. Cee wore dangling earrings. She smiled across the table at Dan and the girl, and relaxed. Melinda was no competition. Cee sipped her Coke.

“Yeah. Two years. It’s a good place for marine biology. Then I’ll come back to Stanford for my dissertation.” On the species Stomolophus nomurai.  Found in the East China Sea, a bell one meter wide. “I’ll be doctor then.”

She glanced at Melinda to check her reaction. “And what do you do?”

The girl had ordered a lemonade, but she wasn’t drinking it. She had on a faded flowered blouse. “I help my mom. I’ve got six younger brothers.”

The girl had prominent bones and sunburned skin. Dan said they were getting married in December.

“Lovely.” Cee smiled. Knowing what she wanted to know. That she would always be the mysterious beauty, the one who couldn’t be caught. He would wed the girl with the strong jaw, but the image of Cee would always pulsate over their marriage.

Millions of jellies live in the world’s oceans. Over 9,000 species. They spend their early days attached to rocks, blossom into flowerlike polyps, then break off and float away.

The newspaper clipping sat on her desk for a week. A friend had sent it from their hometown paper, but she hadn’t been home for fifteen years. Behind her lay divorces, jobs, lovers, success.

She sat at her desk sipping a black coffee and working on an article on Carybdea alata. Box jellies. Off the leeward shores of Hawaii, nine days after the full moon, they appear in swarms. Thousands upon thousands. No one knows why. Through the window next to her she couldn’t see ocean.

She took off her glasses, rubbed her eyes. Nine thousand species. Millions of jellies. They move with the ocean currents and the wind. Sometimes she thought of going home.

She took a sip of coffee and realized the cup had been resting on the newspaper clipping. She picked up the rectangle of paper, torn through where the cup had left a wet ring.

She did not recognize his picture at first, then in the wizened face she saw the boy she’d once loved. The paper said: AIDS. Of course, she thought. Transfusions.

In the next picture, his widow. Melinda. So, she had stayed with him. For fifteen years. Through the illness. Through the tests and the diagnosis. Through the vomiting. The diarrhea. The sores. The tumors. The weight loss. The pain. In the picture, she was staring straight at the camera. That same strong jaw, clenched, determined.

Cee put her cup down. The coffee was stale. She folded the clipping. She held it for a long time. Crowds moved through the street below. There are nine thousand species of jellyfish. They thrive in water low in oxygen.

Jill Jepson is the author of two books and sixty-five works of fiction and nonfiction, one of which was submitted for a Pushcart Prize. She holds an M.F.A. in Writing from Vermont College of Fine Arts and teaches at St. Catherine University in St. Paul, Minnesota.